I had never heard of ulcerative colitis

After the birth of our daughter Michelle in 1990, I frequently suffered from blood and mucus in my stool. In the beginning I didn’t worry so much, but when the symptoms worsened and I was having diarrhoea almost every day, I went to the doctor. When special ointments and suppositories didn’t help, the doctor sent me to a specialist at the hospital and the diagnosis was made: ulcerative colitis. I had never heard of it. With medication, the colitis was kept under reasonable control.

In 1992 our second daughter Louise was born. After the birth of our third daughter Claudia in 1995, it went really wrong. At night I had to run to the toilet 25 to 30 times. Thin, watery diarrhoea mixed with blood and mucus gushed out of me — it was just awful. During the day, I tried to drink a lot to stabilise my fluid balance, but I was breast-feeding. and within weeks I was in hospital. Claudia was only 1 month old; Louise and Michelle were just 3 and 5 years old.

All this had an enormous impact on our family and home situation. My husband worked as a carpenter and had to change his working hours to be able to help. We had 40 hours of home help per week, with three different assistants. Claudia was only a baby and lived with my parents for several months. It was a difficult and anxious time for everyone. I was heavily medicated, and many thought that I wouldn’t leave the hospital alive, but after 3 months of hospitalisation, I could finally go home. In the years that followed, I was hospitalised several times.

In 1998, I was so ill that I consulted a specialist about surgical options. He gave me a number of leaflets about the surgery and stomas. I was horrified by the books about stomas! I hardly dared to look! But my condition deteriorated, and I no longer responded to medication. I was put in isolation, and my specialist made one last attempt at another medication, luckily with success. When I had recovered a bit more strength, I underwent preoperative examinations. But this was a shock — a tumour the size of a tennis ball was discovered on my pancreas! Intestinal surgery was delayed, and I was redirected to an oncologist at the University Hospital. In 1999, a laparoscopic pancreas tail resection was performed, where the tail of the pancreas is removed along with the tumour. The spleen could not be spared. Pathological examination showed that the tumour was malignant. My world collapsed; I had cancer. I could hardly believe it and decided to put this thought aside and focus on my recovery. My family needed me, I could not live without them, and they could not live without me! Fortunately, I recovered quickly and was able to look after my family.

A year later, in 2000, my husband collapsed from a neck hernia that caused paraplegia. He had an emergency operation, but the spinal cord was severely damaged, and his recovery was lengthy. I had not worked since the birth of our first child, but now our situation changed drastically with my husband at home full-time, so I went in search of work. I attended several evening courses and was fortunate to quickly find a job.

I love my stoma!

In 2001, I had a huge relapse of colitis. I was urgently operated on at the University Hospital, the colon was removed, and a stoma was created. I was so happy my colon was gone, and I didn’t mind the stoma at all — I loved it! Friends sometimes asked my husband if he did not mind that I had a stoma. He always said: 'I wouldn’t care if the stoma was on her cheek! She is finally no longer ill, and I think that is far more important!'

Despite the fact that I was doing well with my stoma and had quickly gone back to work, I wanted a pouch operation. I wanted to have my belly back without a stoma and to be able to go to the toilet in the normal way. In 2002, the stoma was reconstructed into an ileo anal pouch. The months following the surgery went pretty well, but after a time the colitis was back, and I became incontinent and was dependent on always being near a toilet. The situation was unbearable, and at the end of 2003, I had a stoma. It was a considered and wise choice.

I can do almost everything even though I have a stoma — motorbiking, cycling, horse riding, swimming, camping — you name it. The motorbike gives me a feeling of freedom, the engine feels fantastic, and I like to go camping on long weekends. Together with my oldest daughter, I go horse riding in the woods just opposite our home. I work full-time as an account manager in a trading company that manufactures and sells products for road construction. I frequently travel by car to visit customers, and I also spend about 15 days a year at trade shows. Some weekends I also work the bar in the VIP box at a circuit where car and motor races are held. I have a busy and active life, and I feel great!

Of course, I like wearing nice clothes, and it is not difficult to hide the stoma, as I always empty the pouch frequently. Very occasionally, I have experienced a leak. In the beginning I was really shocked, but now I stay calm and change the appliance and get on with things. I make sure to always have stoma appliances with me and even keep a set in my car and at my office. I use a two-piece system, which suits me best. The wafer may stay on for several days, and I empty the stoma pouch several times a day and change it every day.

My husband has recovered well from his neck hernia, and for the last 3 years, he has been working as an international lorry driver. Our children have been through a lot in these years. They have always been very strong, and I'm really proud of them. When I turned 40, they wrote a beautiful poem for me. Everyone was deeply moved. It was really impressive to hear how they have coped with these difficult years. Our three daughters are wonderful girls, with a healthy attitude toward life. They are now 15, 18, and 20 years old, and all three studying.

My stoma has given me many good things. I am very happy because I have a great life! 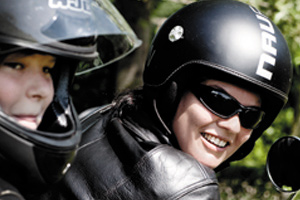 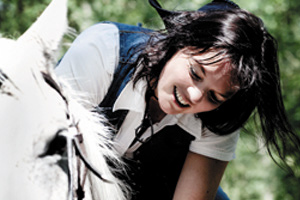 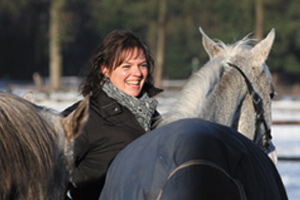