At the end of 2006, I discovered I had blood in my urine and I had pain when I passed water. I got a high fever, felt unwell, and without warning got pain in one foot. I was hospitalised, and it turned out to be a blood clot in my leg. The doctors explained that it’s possible to contract a blood clot when you suddenly lie quite still. My fever had been so high that I had been lying absolutely still in my bed. By admission I told the doctors of my nightly visits to the toilet, blood in the urine, and pain with urination. The doctors scanned my bladder when they heard my symptoms. While I was being scanned, I could sense that there was something wrong. The staff said they could see something in my bladder that did not look normal. But it was impossible to say if it was benign or malignant. The staff at the hospital acted quickly and took a biopsy of my bladder.

Unfortunately the biopsy showed that I had cancer in my bladder. I was shocked because I did not believe that there was anything seriously wrong. I did have a high fever, but otherwise I was healthy and felt well. The doctor who diagnosed me gave me very good information, and it was thoroughly explained where the cancer was in my bladder. I felt safe and in good hands, but naturally I was shocked about being diagnosed with cancer. I have had a healthy life, never smoked, and didn’t have other unhealthy habits.

The idea of having cancer cells in my body was frightening. It was absurd to consider myself a cancer patient. Luckily the doctors could remove my cancer by surgery, and thus I was able to avoid chemotherapy and radiation. My surgery was performed quickly after the cancer was discovered. I had my entire bladder removed to obtain the best prognosis.
When your bladder is removed, you need a stoma. I did not know anything about stomas. When the doctor mentioned the word 'stoma', I drew a complete blank. I got in touch with a stoma care specialist who told me what a stoma was and how it worked. What helped me the most was getting a brochure that graphically illustrated the whole urinary system. The stoma care specialist also showed me what a stoma bag looked like. But I could not relate to it at all. I was thinking about the operation, focusing solely on getting the cancer out of my body. The rest would have to wait until later.

The first days after my surgery

When I woke up after surgery, I had no thoughts about the stoma. I just wanted to know if the operation was successful! I was very focused on fighting the cancer out of my universe. My wife and my daughter thought I closed myself inside a 'shell'. It was the hospital and me, and no one else, who were working on getting the cancer out of my body.
My wife and daughter later told me that they were unhappy, as they mentally could not get in touch with me. They felt that I had isolated myself from them. It was incredibly tough on my wife and daughter. Looking in the rearview mirror, I think I withdrew because I was scared and extremely busy managing through the operation. Obviously, I could hardly bear the worries and care of my loved ones. We have fortunately talked about it since, and it was a relief for all of us. My wife and daughter have been fantastic the entire time. They backed me up and have been there for me despite my reactions.

My stoma — a new companion

When I recovered from surgery, I was ready for the next step in the process — to get familiar with my stoma. It did not take long before I could change the stoma bag and baseplate myself. Still, I had to get used to being in bed with a drainage bag at night. It was a bit awkward to figure out in the beginning. Because urine is created all day and all night, it is necessary to have a tube connected to the bag at night to avoid having it get too full of urine. For me it was all about performing rituals, to make all the work practical. Now I am enjoying it, I look upon it as something natural, and I can deal with it.

In the beginning it was strange not to be naked. I always had my stoma bag on and never felt completely naked. The feeling of being naked is important to me — that is why I take a shower every morning and take it all off — including my stoma bag.
Before I got my stoma, I had seen a comedy show on TV where they ridiculed a person with a stoma on his way into a swimming pool. It made me wonder if it would be a problem to go to the public swimming pool or bathe by the beach. But it has not been a problem. I do exactly as I please. I swim, bicycle, do my workout, and play petanque. I live the life I did before I had my stoma. I play the piano, guitar, and harmonica. The music does not sound different because I have a stoma. I still work as a salesman. Before I got cancer and my stoma, I was already working reduced hours. I enjoy coming out to speak with the customers, I like my job, and I cannot imagine resigning. The stoma has not been an obstacle to functioning in my job.

Good advice to others

My first advice to others in the same situation as me is to get a notebook. Write down all your thoughts and questions. Ask the staff about everything that occurs to you. It created calmness, safety, and an overview in the course for me. I recommend others seek help from doctors, nurses, and other people who have a stoma. I spoke on the telephone with a man who had bladder cancer and a stoma — just like me. It was of great help. We could talk about things that others didn’t completely understand, unless they had been through it themselves.
One may choose between many stoma bags on the market. My advice is to get familiar with the first system you try. After a while, I started experimenting with different types of stoma bags and found the bag that suits me best. It takes some time, and experience plays a major part. When I am travelling, I always bring abundant stoma supplies. Especially when going by plane, it is important to have them in your carry-on luggage. You never know if all your suitcases will reach your holiday destination at the same time you do. 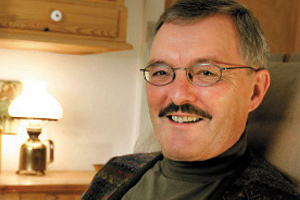